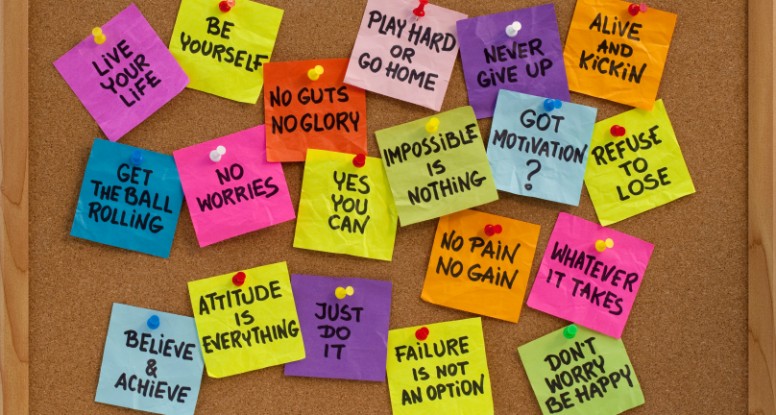 The 20 Greatest Motivational Quotes Of All Time

I realize that you may very well disagree with some of my favorite motivational quotes.

As such I’d love to hear your own personal favorites in the comment section.

Apparently it’s statesmanlike to stand firm and not change your mind.

It’s also idiotic if you ignore new evidence and refuse to admit you may have been wrong.

I remember when John Kerry ran against George Bush and it was discovered he’d changed his stance on the war in Iraq.

He was pilloried by the Republicans for being a flip-flopper rather than commended for being honest enough to accept he was wrong.

“Until one is committed, there is hesitancy, the chance to draw back. Concerning all acts of initiative (and creation), there is one elementary truth, the ignorance of which kills countless ideas and splendid plans: that the moment one definitely commits oneself, then Providence moves too.

All sorts of things occur to help one that would never otherwise have occurred. A whole stream of events issues from the decision, raising in one’s favor all manner of unforeseen incidents and meetings and material assistance, which no man could have dreamed would have come his way.

Whatever you can do, or dream you can do, begin it. Boldness has genius, power, and magic in it. Begin it now.”

This is often mistakenly attributed to Goethe when it really just came from a Goethe couplet and is presumed to have been said in full my Scottish Mountaineer, W H Murray.

Is there are greater quote on the importance of commitment? I doubt it.

3. “To avoid criticism, do nothing, say nothing, be nothing” – Elbert Hubbard

Many people are terrified of criticism and will often keep their head down and go with the flow for fear of being on the receiving end of it. The world doesn’t need that, speak your mind

4. “A small group of thoughtful people could change the world. Indeed, it’s the only thing that ever has” – Margaret Mead

Another oft cited quote and one that inspires people (or at least should do) to believe they really do have more power than they could ever imagine. Don’t ever think you are powerless.

5. “Success consists of going from failure to failure without loss of enthusiasm” – Winston Churchill

There are so many quotes regarding the importance of failure in being successful, but imho, this is the best.

6. “You must be the change you wish to see in the world” – Gandhi

I almost left this out because it’s tweeted to death and it possibly the most well-known quote in the universe. But there’s a good reason for that, and that’s because it’s stunningly brilliant.

You cannot ever change anybody else, you can only change yourself and hope you inspire other people to do the same.

7. “Many of life’s failures are people who did not realize how close they were to success when they gave up” – Thomas Edison.

Three years ago I had a client that I knew was really close to making a huge breakthrough when she lost her nerve.

The fact that I’m telling you about it know demonstrates how frustrated as a Life Coach I was. There is a time for giving up and a time for pushing through, even though the latter can sometimes be scary.

I hit 50 next year and it seems incomprehensible to me. I still get hyper excited about work, I still laugh my ass off at juvenile humor and as I type this I have loud dance music playing in the background.

Don’t stop being young because your birth certificate tells you too.

Is there any need to explain this? Probably not because we all know how shit we feel when we’re angry, so let it go and don’t feel shit.

Note: It would appear that this is actually falsely attributed to The Buddha. However, it’s still an amazing and relevant quote.

10. “Life is what happens while you are busy making other plans” – John Lennon

Doesn’t that sum up many people you know, maybe even yourself? Are you so busy planning what’s next, that you forget that now is already here. Planning is crucial of course, but so is enjoying the only time you ever have, now.

11. “No one can make you feel inferior without your consent” – Eleanor Roosevelt

Every feeling you have is generated internally as a reaction (usually) to external events. It is your interpretation of events that gives them meaning, not the events themselves. How liberating is that? To know that people can only hurt you if you allow them to.

Of course, you have to believe it first.

12. “A ship is safe in harbor, but that is not what a ship was built for” – William H Shedd

Another quote that may not be attributed to the right person, but who cares who said it, it’s still brilliant.

You can hide yourself away from the world, you can avoid doing anything risky or out there, but that’s not what you were put on this earth to do.

You were put here to be the best person you can be and that means taking risks by hauling anchor and sailing out into the uncharted open sea from time to time.

14. “It is the mark of an educated mind to be able to entertain a thought without accepting it” —Aristotle

Most people I know like to think they are open-minded. Yet if you cannot entertain thoughts that contradict your belief system, how open-minded can you truly claim to be?

15. “What the thinker thinks, the prover proves” – Robert Anton Wilson

Taken from the absolutely brilliant book ‘Prometheus Rising’ Wilson sums up in a sentence something we all do, which is to look for evidence to support the beliefs we already hold rather than questioning them.

16. “People often say that motivation doesn’t last. Well, neither does bathing – that’s why we recommend it daily” — Zig Ziglar

Belief in yourself is so important and often the determiner in how successful you are in life.

Believe in yourself because you’re absolutely brilliant!

19. “Reality is merely an illusion, albeit a very persistent one.” – Albert Einstein

Look if the great man himself says reality isn’t real, who are you to argue?

Go and set your own reality and don’t allow other people to impose theirs upon you.

We ask ourselves, Who am I to be brilliant, gorgeous, talented, fabulous? Actually, who are you not to be? You are a child of God. Your playing small does not serve the world. There is nothing enlightened about shrinking so that other people won’t feel insecure around you.

We are all meant to shine, as children do. We were born to make manifest the glory of God that is within us. It’s not just in some of us; it’s in everyone. And as we let our own light shine, we unconsciously give other people permission to do the same. As we are liberated from our own fear, our presence automatically liberates others.” – Marianne Williamson

The quotes were in no particular order, but I think I’ve saved the best till last because the passage from Marianne Williamson’s ‘A Return To Love’ captures the essence of almost all of the preceding quotes and if you can live your life by that one passage you will die a happy person.

So come on, don’t just sit there, leave me your favorite quote in the comments!