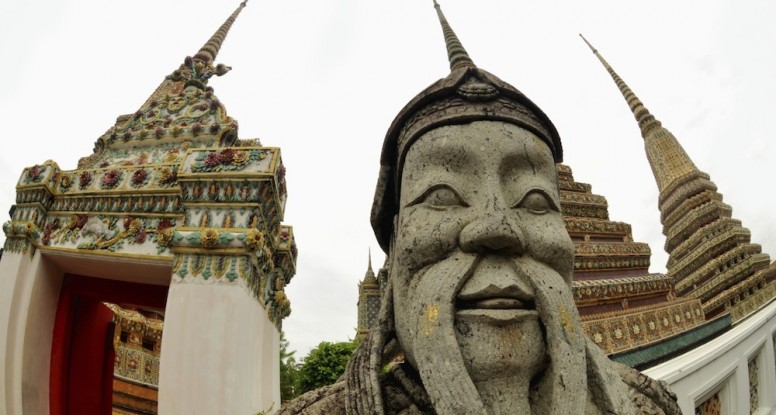 One Reason You Screw Up Badly

Once upon a time when fire-breathing dragons roamed the earth, guru’s were somewhat thin on the ground and the Internet was on dial-up, there lived a very wise man in a land far, far away (probably China, not entirely sure, it could have been India, or even Finland for that matter).

This particular wise man was so wise he had owls worshipping him, and was deemed to be a Zen Master.

In the wisdom stakes that’s pretty damn good, let me tell you.

He was revered by all the villages as the go-to guy on any issues pertaining to wisdom, trivia quizzes and who is likely to win March Madness.

Then one day it all went horribly, horribly wrong.

Our Sage was sat in his mud hut (may have been an igloo if it was Finland, who knows?), stroking his chin and drinking green organic decaffeinated wild mountain tea with a hint of sea salt, when the door burst violently open.

In stepped Bob the village Fishmonger brandishing his best fish filleting knife and not looking at all happy.

“You have been sleeping with my daughter” screamed the irate Bob.

“Is that so?” replied the Master

“Yes it is that’s why I said it you stupid fucker. And another thing, she’s pregnant!”

“Is that so?” said the Master again

“Yes, and the child will be your responsibility when it’s born”

“Can you stop saying that now please, it sounds silly and I may have to cut your head off and I don’t want to blunt my best knife”

At this point the story gets hazy, but most Buddhist scholars such as Bodhipaksa are fairly sure Bob pounced on the Zen Master and punched him several times in the face before pulling his beard very hard indeed.

A few times in my life I have come under attack because somebody or someone, misunderstood my motives.

There was the time I was following a speeding ambulance through North London after my dad had had a stroke and I had no clue as to where the hospital was.

Quite naturally the other motorists thought I was trying to slip stream the ambulance to cut through traffic and weren’t happy.

I was accused of employing a marketing scheme because I and my co-author decided to give away How To Be Rich and Happy to good causes.

And somebody once accused me of being an arrogant, pasty, limey jerk.

Ok, so the last one may be largely true, but come on, pastiness is subjective, I’m a bronzed God compared to a polar bear.

Of course we want people to think positively about us, but if they don’t, should we really worry about it?

Should we use up our energy trying to convince somebody how lovely and cute we are, when we don’t even know their motives, or what drives them?

Their actions may stem from jealousy, fear, having a bad day, rampant paranoia or a genuine belief they are helping others.

Or of course they may just be an asshole that enjoys stirring the pot.

I know as a an experienced Life Coach I should refrain from suggesting assholes exist in a metaphorical sense, but sadly they do.

They may well deserve our empathy, support and a non-judgmental attitude, but that doesn’t mean there aren’t any.

After the baby was born to the Fishmongers daughter, Bob went to drop the kid off with his new dad.

“This is your son, his name is Billy-Bob Bobkins” said Bob.

“Oh don’t start that again, I’m not in the mood you weird bearded, tofu-eating, sandal-wearing fucker of leprechauns!”

Bob felt his hand slowly caress the leather handle of his knife as the cold hard steel started to slide out of it’s trusty pouch.

But then he remembered his promise to Bab’s, his wife, that he was under no circumstances to decapitate the Master, especially as it was Bingo on Tuesday and she needed the winning numbers.

So reluctantly Bob backed slowly and silently out of the hut leaving the baby behind.

A couple of years later and there was a party at Bobs hut/igloo/palace* (*delete where applicable) for his daughters 21st birthday.

There was much merriment and lots of ‘herbal’ tea and strange tasting cookies being consumed (probably opium too, but again history is unclear).

Quite frankly Bob’s daughter was hammered, and in her inebriated state decided to announce to the world that the Zen Master wasn’t the real father.

It was actually Frank, the traveling fish filleting knife salesmen.

A huge gasp went up in the house, not least of which came from Frank who was in town for a few days attending a knife sellers convention and was stood at the back eating a creamed haddock vol-ua-vent at the time.

After almost choking on the savory delight, Frank dived for the door cutting several people’s femoral arteries with the knives falling from his display briefcase (they were very advanced those Chinese/Indians/Finns* (Again, delete where applicable).

Once outside he made a break for it running straight into the teeth of a dragon/tiger/ice berg* (delete where applicable) never to be heard from again.

“Shit” said Bob, “I suppose I now have to go and apologize to the Master and get the bloody kid back?”

Barbs glared at him as people groaned in agony on the floor and pools of blood darker than the darkest skies started to pool around her feet.

He got the message.

Off he trailed back up the hill, only this time on arrival he knocked meekly on the door. As he entered he could see the baby asleep in his ‘fathers’ lap.

“Er, I’m going to need the little fella back please Your Most Highest Excellency”

“Er, this is all a bit embarrassing because apparently you didn’t nail my daughter senselessness at all, it was that bastard Frank.”

“You know, the knife guy with the mullet hair cut” (laughs weekly)

“Yeh, who’d have thought it, huh? Oh well, I’ve got to be going I have a delivery of Bulgarian Haddock due in any time now and it probably needs descaling, stabbing in the throat or some other technical fishmongergy shit like that”

With that, he scooped the baby up and ran back down the hill.

What Misconceptions Do You Carry?

We all carry many misconceptions around with us. We often have to form incredibly rapid decisions about people and events without all the information.

That’s just life and there is no way round that.

It isn’t making the decisions that’s really the problem, it is the holding onto them when contrary evidence shows up to suggest we were wrong in the first place.

We have a tendency to start looking for evidence to back our initial opinion up, rather than evidence that will cast doubt on it.

This is a well known cognitive bias called confirmation bias.

When we get into this mindset we often don’t even see the truth of the matter when it presents itself because we have become so invested in our initial belief.

We just want to look for evidence that support are pre-held belief.

There is power in knowing this.

Power because I KNOW you will have some such beliefs about yourself.

Beliefs that aren’t facts, but may well be holding you back because you continue to hold on to them.

Well, I’m guessing you’re an open-minded person, so how about scrutinizing them a bit more seriously?

What about really exposing those beliefs to the scrutiny they deserve by shining a bright light in the fuckers eyes?

Could you do that today?

Could you take one niggling, self-limiting belief and demolish it and kick the shit out of it with contrary evidence?

You can always ask yourself, “Is that so?”

And if the answer comes back, ‘Yes?”

Then you just ask yourself again, “Is that really so?”

And you keep asking over and over until your mind starts to doubt those self-limiting beliefs.

I suspect you really are capable enough, are attractive enough, do have enough money, have got a pretty good life or are worthy of other peoples respect?

Please let me know in the comments what you think and what you can change.