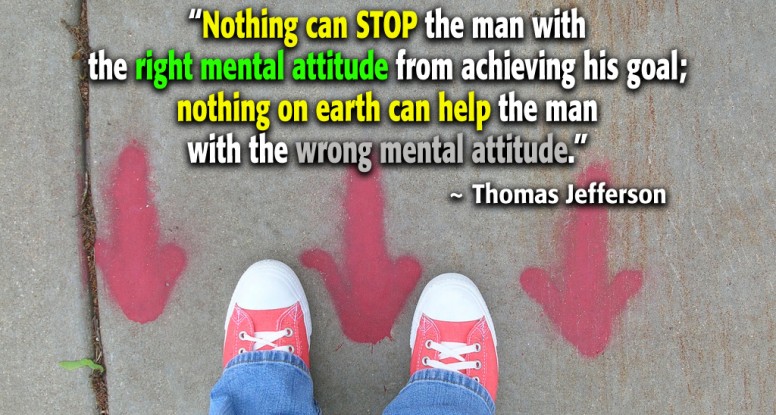 At the end of the 19th century the brilliant psychologist and philosopher William Joyce was due to give the keynote speech at a huge convention for psychologists.

There was much excitement once news circulated that James had agreed to talk and people came from all over the country to see the great man deliver his wisdom.

There was a huge sense of anticipation in the build up to his talk and when he finally came on stage the room was at fever pitch. He walked up to the lectern, surveyed the audience and said:

“The greatest discovery of my generation is that a human being can alter his life by altering his attitudes of mind.”

That was it, that was his entire speech. He then walked off stage again, out of the room and presumably back to his hotel to raid the mini bar, leaving behind lots of unhappy people demanding their money back.

Most Life Coaching is done at an action level i.e. a plan is formulated to help the client get from A to B in the quickest most desirable manner.

That’s cool and will work on some occasions, but it doesn’t address the underlying problem that’s caused the client to become stuck in the first place, their attitude and more specifically the thinking that created that attitude.

The analogy I trot out to most Life Coaching clients is that if you get a headache you’ll probably take a pain killer.

If you get one the following day you may very well take another pill and even the day after that.

At some point though, you’re probably going to want to stop attacking your liver with huge quantities of Advil and get to the cause of your pain. That way you can stop the headaches occurring in the first place which is a much better option.

I want to explain a simple yet incredibly powerful method for helping you change your attitude towards things that at the moment may just plain piss you off.

If you’re a life coaching client, have read How To Be Rich and Happy or have been reading this blog for any length of time you may already know this stuff because I’ve talked about it before, but it’s importance cannot be overstated and it bears repetition.

There are two primary ways you create feelings and emotions, through the language you use both externally, and more importantly internally, and by the associated images you create inside your head to represent that language.

What most people don’t understand, is that rather than just letting their thoughts run amok they have the power to intercept them at a conscious level and change anything that doesn’t make them feel good whenever they want to.

The Importance of Your Language

How often do you make a statements similar to the following?

I hear things like that from almost every client I ever see to a greater or lesser extent. I’m sure they don’t look that unusual to you, and you’d be right, they aren’t at all unusual, which is why few people ever stop to question them.

They are however, massively unhelpful and restricting.

Whenever I hear statements like that the first thing that jumps into my head is the question,

When I ask a client that it usually creates a momentary sense of confusion as they go inside and pose themselves the same question, or what?

And that’s exactly the point. There are very few things in life you absolutely have to or must do. Maybe breath and pay taxes, but most other things are up for debate and getting a coffee is never a must no matter how cranky you are without your caffeine fix.

Most people at this point are still a bit doubtful, after all, these are only words and they do a job, right?

Well yes they do do a job. If that is, the job you want doing is to remove choice, make every task feel like a chore leaving you with a bad attitude toward whatever it is you think you need to be doing.

I’d like you to close your eyes and think about somebody saying any of the above phrases, even the example of of somebody saying they need a cup of coffee if you so wish.

What comes to mind?

It’s almost impossible to use those phrases without effecting your physiology in a negative manner. I must do this, or should do that, brings to mind somebody with a miserable look on their face, a drooping of the shoulders and a resigned sound to their voice.

In short they have a bad attitude toward whatever it is they say they must/should/have to do because they have put themselves under pressure at an unconscious level by using inappropriate restrictive language.

Don’t Damage Your Self Esteem

Not only does using these words make whatever it is you want to do seem more onerous, but you also risk damaging your self-esteem.

The isolated occasions when you say you must lose weight and you don’t isn’t an issue, but if you keep saying it over and over again with no action you stop trusting yourself.

So what’s the alternative?

How about saying you’d love to, would like to, or it would be fun to?

Think of the associated body language when you say you want to do something.

It’s an instant attitude upgrade because you cannot be congruent between the words you’re speaking and your body language (and sarcasm isn’t being congruent by the way) and still have a grimace on our face.

I realize that may be  stretch if you’re off to do something you positively hate to do, such as getting a dental check up. In these cases simply replace “I need to” with “I choose to”, because after all, you are choosing.

I doubt it will have you looking forward to being stabbed, poked and scrapped, but it may blunt the edges and you take back control of the situation.

It’s so easy to underestimate the power of the words you use, especially as you hear other people talk the same way on a daily basis and you’ve used them all your life.

Trust me on this though, I have seen massive positive change in clients when they’ve succeeded in implementing more empowering language .

I’ll be honest and admit it’s not an overnight fix and requires some serious commitment.

However, if you get other people to let you know when you get it wrong (kids are brilliant at pointing out any indiscretions, especially if you offer them a quarter every time they pick you up on it and they learn into the bargain), you’ll soon start to feel better about stuff that previously used to bug the hell out of you.