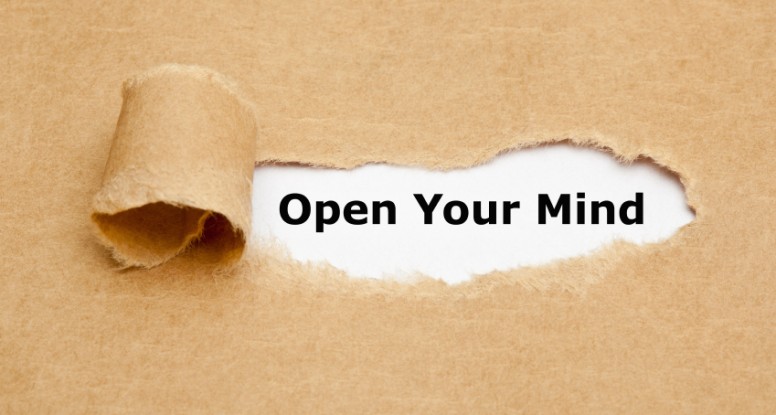 How Open-Minded Are You?

I’ve often wondered how much guts it must take to be a bad magician and still willingly put yourself in the public domain.

Imagine it’s your first time on stage and you’re still perfecting your craft. You’re very nervous, your hands are shaking a tad and you’re convinced that the audience can see the rabbit wriggling around in your underwear.

Once you get your act underway people start shouting stuff like, “The bird is in the hat we can see it” or “You never put the card back, look it’s up your sleeve” or even, “I think you’d better stop sawing now because your assistant is bleeding profusely. Can somebody call for an ambulance please?”

How is it that a good magician can easily deceive people with things that are relatively simple? Especially on occasions when the audience is so up close and personal?

One of the biggest hurdles I have to overcome as a Life Coach is to get people to think differently.

The reason this can be so difficult is an easy enough concept to understand.

We’ve all had years of perfecting the way we currently process information and to think radically differently would take us so far outside our comfort zone we’d need a map and a compass to find our way back again.

My guess is that you seldom if ever stop to ask yourself , “I wonder if I’m thinking right today?”

You simply carry on as before because it seems to be working ok in so much as you’re not dead, and let’s face it, that’s the main thing.

ventually they become so automatic, so ingrained and so part of your identity that you either don’t even notice them any more, or even worse, you start to think they’re facts rather than beliefs.

It wasn’t always like that though. When you were much younger you would look at the world with an open-mind and even dare I say it, a certain sense of awe.

You took things on face value rather than running everything through a complex set of filters built up around your beliefs and values.

It takes years of modeling other people to be able to lose the ability to judge each situation on its own merits and become close-minded.

However, most of us manage to do it with aplomb through sheer persistence and the kind of dogged commitment that could move mountains for us if we utilized it more efficiently.

Remarkably though, nobody ever thinks they are close-minded and you’re included in that massive sweeping statement.

It appears to be the one saving grace and attribute that everybody feels comfortable they possess.

Which is kind of weird, because if everybody is really so open-minded, how come there are so many arguments, confrontations and wars in the world?

Wouldn’t they be a thing of the past much like tank tops, dial up and intelligent political debate?

Surely if you’re completely open-minded you’ll always know better than to get involved in a petty arguments because you can always accept a contrary opinion as being equally valid as your own.

You’ll never belittle or dismiss anybody else’s view point because that’s not what open-minded people do and you know a varied discourse benefits everybody.

If I can help a client to start thinking more like a child again, then I’m well on the way to helping them to become more open-minded and thus exponentially improving their chances of implementing lasting beneficial change.

The reason many people don’t change that much when they get into adulthood is because of the ‘need’ to hold on to beliefs and old ways of thinking about things. To them that’s just how the world is and their grasp of reality is THE grasp of reality.

Many magicians don’t like performing closely with kids because they quite literally look at the world in a different way to adults.

If you want to become more open-minded and have the flexibility of thought that some of the great problems solvers possess, start to cultivate thinking like an infant again.

Be curious about life rather than thinking you have it down pat.

Be fascinated by this world we live in, because let’s face it, it’s truly an amazing place.

Most of all though, have some fun! In the great scheme of things you’re here for a blink of an eye and you can use that time wondering what if and looking back on a life of regrets, or you can squeeze every last drop of enjoyment out of life exactly as a child would.